For me personally, 2013 was a year of some pretty big changes. One of the biggest events was purchasing a house with 10 acres of good old rocky Montana soil beneath my feet. My long term goal will be to convert at least a small part of it to a more sustainable lifestyle. Raise some vegetables and a few animals to supplement the normal grocery store habit. Of course, my life needs to slow down a little bit before then, but I have time.

The huge plus side of buying the house has been that it has forced me to explore new areas of Montana that previously I had only driven through on my way to somewhere else. This aspect has been very rewarding, maybe more for my soul than my photography, but I let other people decide that.

This past year was also a huge learning year for me. I took fewer photographs (only about 10,000) than the previous few years, listened carefully to other photographer's advice, read tons of articles and blogs pertaining to photography and constructively critiqued myself without beating myself up. All in all, I'm happy with the results.

When I was deciding what photos to represent the year, I chose ones that meant something a bit more than just a photograph to me rather than choosing by sales or number of likes or comments. I love going out and capturing the world around me, but the ones that really stand out to me have a little something extra attached to them. I hope you enjoy these as much as I have enjoyed capturing the tiny slice of time. 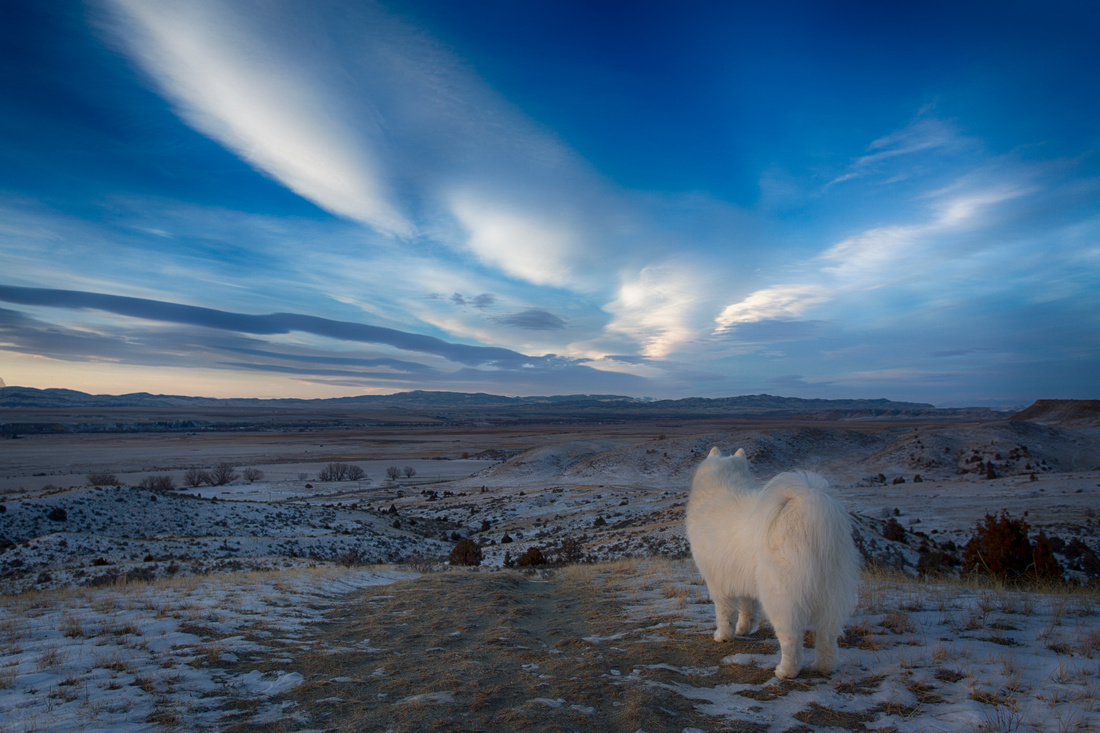 Waiting for the Magic Hour

There is a state park about 15 miles from my house. It doesn't get a lot of visitors. So few in fact that the state wanted to close it down for lack of interest and waste of dollars. At the last minute it was given a reprieve. Except for peak tourist months, it is rare to run into more than one or two other people. Perhaps the "Beware of Rattlesnakes" signs don't help it's popularity. But for the dogs and I, especially in the winter months, it's a beautiful place to take a deep breath and feel like you are on top of the world. 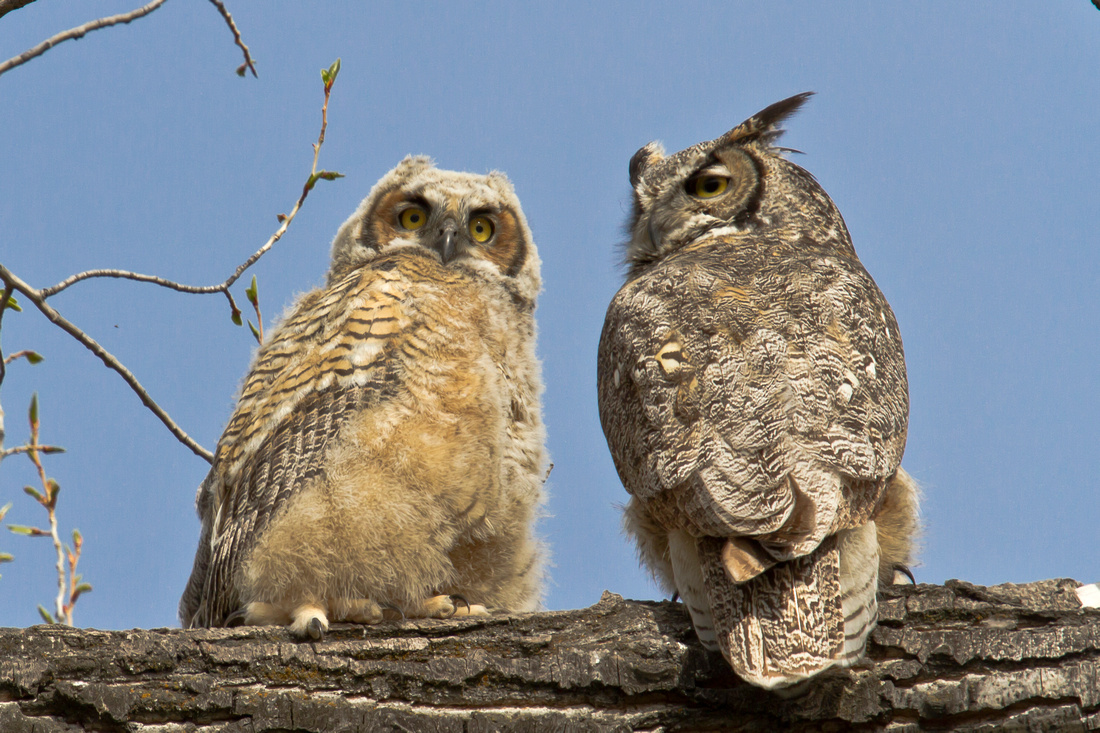 Finding an owl to photograph had always eluded me. This past April I discovered this Great Horned Owl and her two owlets and made almost daily trips back to the nest area to watch them grow and eventually leave the nest. There were many days that I watched them for hours and never took a photograph. This, for me, was a huge treat.

I try to be very spare in my use of black-and-white photos. It is too easy to become gimmicky, trying to be too hip or trendy. This was one of those moments that as I was composing this image, I did so with having it in black-and-white as the final product. For me, all the elements had lined up perfectly before I even got there. All I had to do was point the camera. 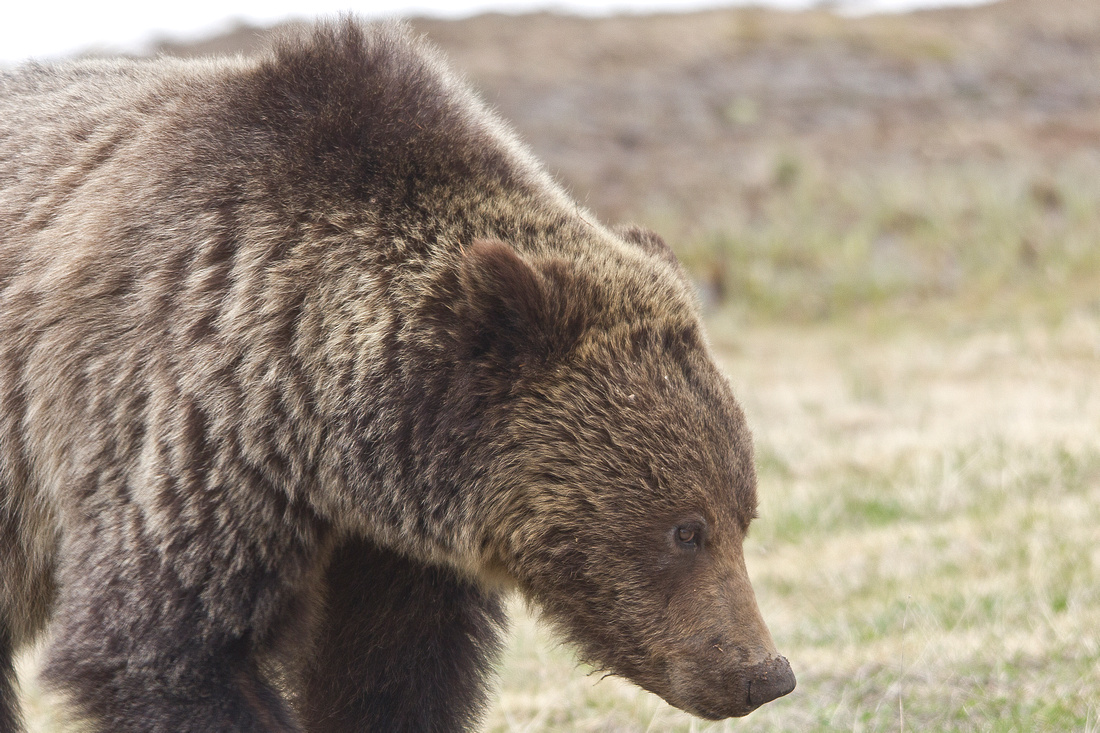 Taken in Springtime, this was my first Grizzly outside of Yellowstone Park that I was close enough to photograph without it looking like a black dot on the landscape, but not too close that I needed to remove myself in a hurry. I hadn't been looking for bears that day, and considered this a gift.

Sometimes you're the matador...

As I have said many a time, I'm an east coast boy just trying to make his way in Montana. Rodeos were as foreign to me as being stranded in outer Mongolia would be. The first summer I was here my friends took me to one, and I was hooked. These guys and gals that participate do things to their bodies constantly that I couldn't have done once in my prime. And unlike a 9-to-5 job where you get a paycheck for just showing up, these folks don't make a penny unless they place. For someone like me who defines time in 1/2500th of a second intervals, rodeos are the most action-packed event I could imagine, This steer wrestler didn't take a check home that day. 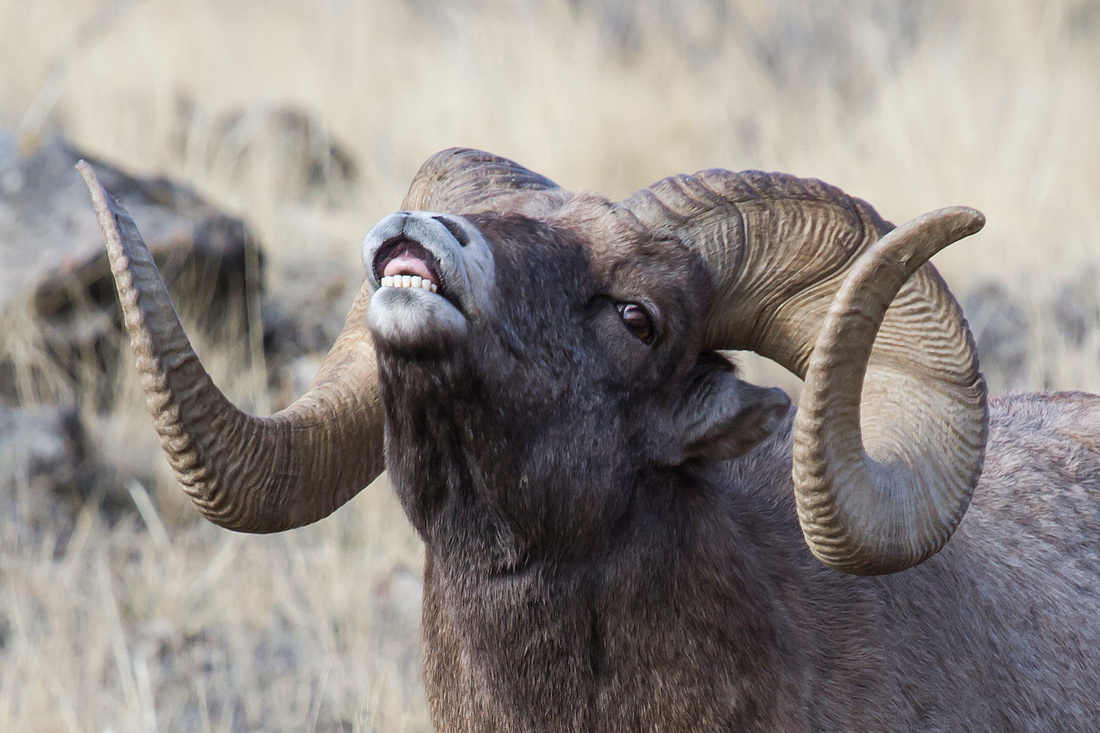 Love is in the Air

Bighorn Sheep. By far my favorite of the ungulates to photograph. In late fall they come down from the mountains to find a mate and do the deed. Although you need to keep your distance, they are very accommodating for photographers as a rule. The adults are way too distracted to care about you, plus I am pretty sure they realize they can flatten the average human without much trouble. The lambs are ridiculously cute and equally curious. Many times I have had to back away as a lamb will approach me to check me out. The last thing I want is mommma coming over to stomp my lights out!

This is a very recent image. This image was a direct result of many of the things I learned from other people this year. A lesson to remind me not to let my ego or preconceptions get in my way. On a personal note, I couldn't have been more thrilled with the way this photo turned out. 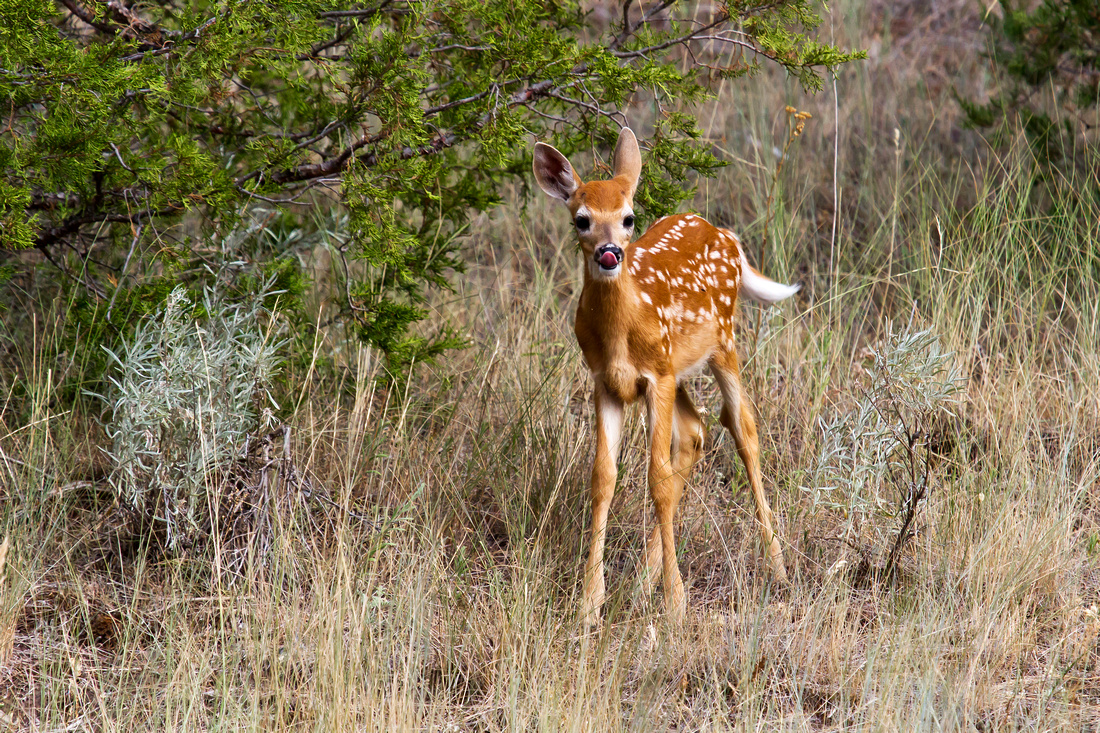 White-tail fawn sticking his tongue out

The day that I captured this little fawn I was trying to find a back way into a tiny deserted town which unbeknownst to me had been recently purchased and fenced off from the public. My attempt to access the town was a failure but coming face to face with this creature wiped any feeling of failure away. 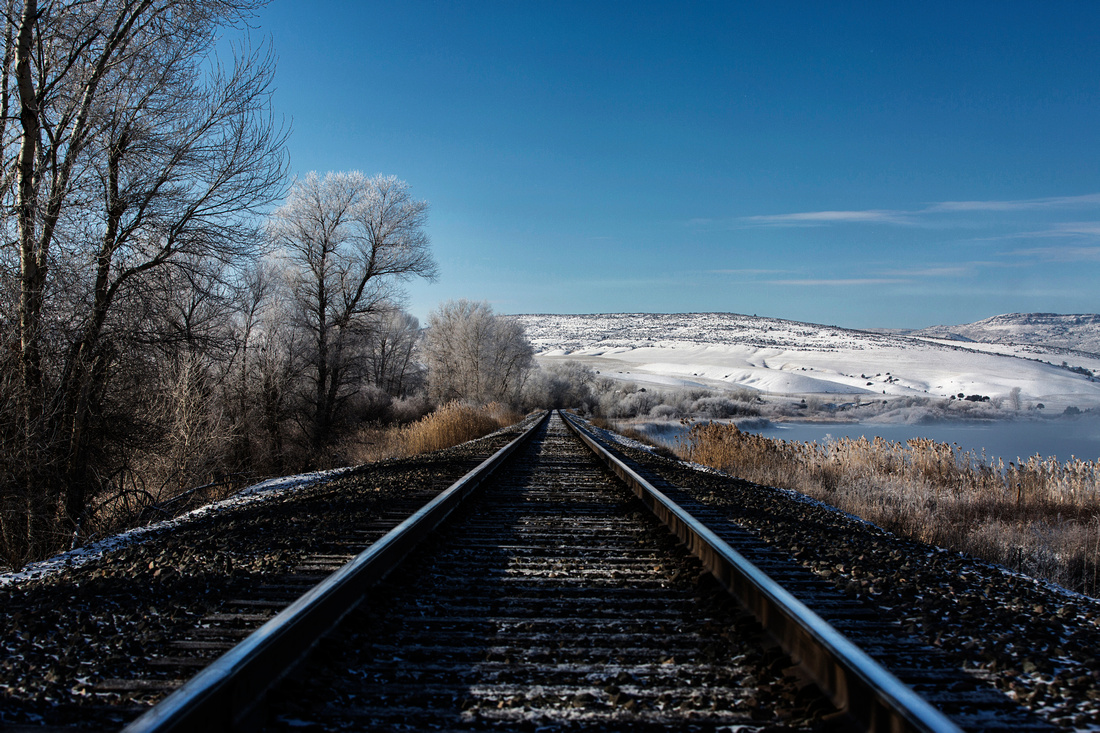 Another relatively recent image. Along the Missouri river about 35 miles west of Bozeman, the tracks go from two (one in each direction) to just the one track. The trains run slowly through this area as they are waiting for signals and switches and other train stuff. I discovered this stretch quite accidentally and planned to return when the weather had finally cleared about a week later. The day the sun finally came out it was -25˙F (-31˙C). and crystal clear. When I got to this spot and saw how perfectly the tracks were lit and reflecting the blue sky, I was giddy. I sat down between the two rails (I forgot my tripod) to steady the camera the best I could, and took about 15 frames over the course of the next half hour as the light changed ever so slightly with each passing minute. It took me the rest of the day to warm back up.

This was another of the big events for me this year. My adult dog, Noodles, has been with me for the last seven years. She is the best dog I have ever owned. Perpetually young at heart and full of energy, I had decided to get her a companion. Levon joined us in September after being on a waiting list for nearly a year. He's shaping up to be a fine boy as well. Now in the mornings I watch them both run, chase, play and wrestle each other for a couple of hours before their breakfast. It does my heart good to see Noodles having the type of fun a human just can't contribute.

I hope you enjoyed my 2013 review. Thank you so much for all your support.

May 2014 bring you much happiness.

Leslie Jonas(non-registered)
Dearest Aaron,
All I can say is what a year eh? Your work is incredibly deliciously appealing to my visual sense. Thank you for your gifts of 2013.
I'm so happy for you... as you bear (no pun) true evidence of complete happiness in your new home and life with Noodles and Levon in Montana. Wow is the word I keep coming up with. Who woulda thunk? as we drove recklessly thru the streets of the South End in the 80s, partying beyond what partying knows... Your love of nature and the ways you capture it in all of its perfection is glorious..sheez, well, sometimes I look at your photos and read the stories and comments and I'm speechless. What a joy it is to see this happen to one of my oldest greatest friends in my lifetime. What a true joy. Love, Les