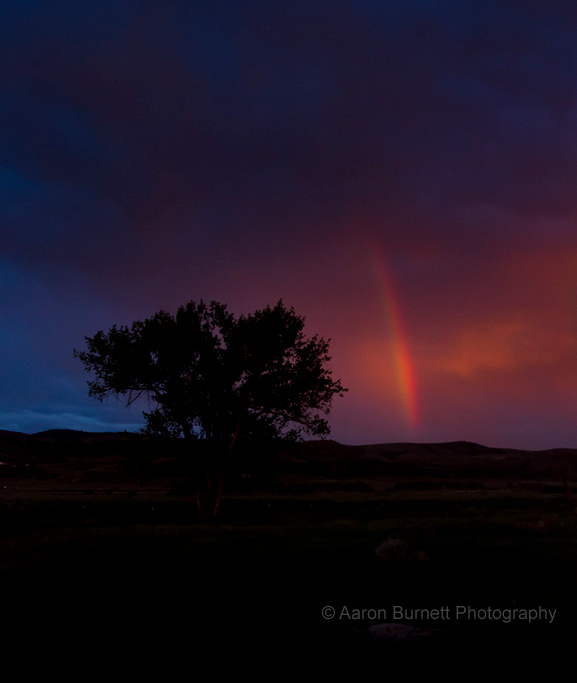 The story goes that a famous photographer was once asked how he caught so many amazing images. The answer of "f/8 and be there" has been attributed to several different photographers, but the important thing is the message; It is more important to be on the scene than it is to worry about all the technical details.

I've mentioned before that I consider myself a photographer of opportunity. It's rare that I set out to capture something in particular, wait any amount of time, and then get the shot. I don't have the attention span nor patience for that most of the time. I hope to "be there" more often than not.

For me, this shot represents a probable once in a lifetime shot. As I was walking home past sundown a thunderstorm had moved in, soaking both me and the dog. I've gotten pretty good at keeping my camera dry when I am ill prepared fortunately. As the storm moved by, one last bit of light was reflected from the west and this rainbow appeared for maybe 10 seconds.

Horrible conditions for photography. Almost no light, very slow shutter and high ISO. Hence the graininess in the image. I doubt I will ever have the chance for a 'do over' of anything even close to this. But I was 'there'.

Being out there is the challenge that I bet all photographers face. Those lucky enough to make their livelihood from photography can only be in one place at a time. Those like me that still have to work a nine-to-five job struggle to get some free time with the camera after work and on weekends, which coincides with when people, dogs, and chores also demand your attention as well.

Probably for me the hardest part to accept is when being there doesn't work out. Nothing photo-worthy to shoot. I recently spent a day in the mountains, no dog to distract me, no phone service. Although it was a pretty area, it wasn't a "I want to capture this to keep forever" type of location. Even the wildlife stayed home that day. A day off from work with no gain other than fresh air.

But that makes shots like the one above that much sweeter.

The weather for the last week or so has been unbearable as a heatwave has gripped the western US. You just know it's going to be a scorcher when the temperature went from 57˙ to 81˙ in under an hour the other morning. I have to admit to hiding indoors during this relentless heat. I'm pretty sure my dog will melt in another day or so, so she is none to eager to venture out during the day either. Doesn't make for many new photographs though.

ps. Google fooled me with their wording and I accidentally wiped out the photos on the previous posts.