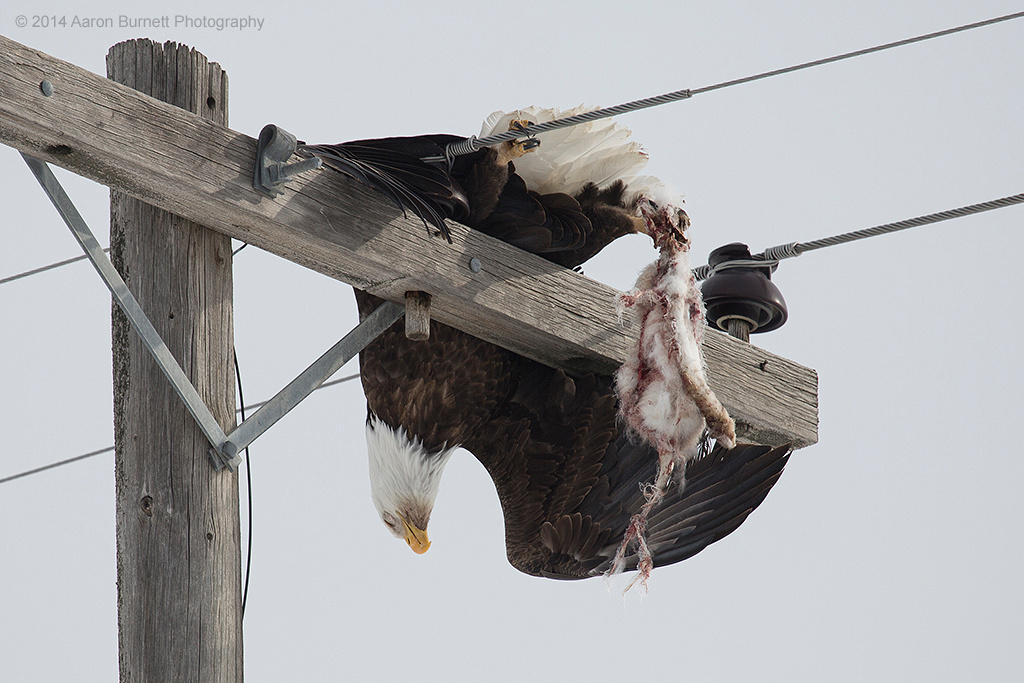 Late Wednesday afternoon I noticed something on a utility pole that I couldn't make out as I drove by. I turned around and could see that it was an eagle that had met it's demise. I didn't have a camera with me and couldn't quite make out what I was looking at. I assumed that another eagle had attacked it over food or territory. A sad event.

Thursday morning on my way into town, with a camera and telephoto lens, I stopped once again. I immediately realized the poor guy had been electrocuted while he was having his rabbit dinner which he was still clutching in one talon.

One of my friends suggested I call Montana Fish and Wildlife and let them know what I found. I didn't think they would be interested at all seeing the eagle wasn't tagged, but much to my surprise they put me through to a biologist, Claire Gowen, who was very interested. I sent Claire the photo and gave her other information on the location and other details. Claire was very familiar with the area, she even knew there was a mated pair of bald eagles in the area and she was concerned this may be one of them.

Claire told me she would call the power company as it is their responsibility to remove it as well as either upgrade the pole so the birds can't get electrocuted or to add a deterrent so they can't land on it. She also told me that a game warden will be present to take possession of the eagle once they brought it down.

Ms. Gown called me back in a short while to confirm that all the gears are in motion and the proper authorities will all do their job as she had explained. Shortly thereafter the biologist from the power company called me back to thank me and assure me that they will remedy the situation with the poles being dangerous as well as tell me that a crew has been dispatched already. He also seemed very sincere and concerned for the safety.

On a personal note, there are many times where just like a newspaper photographer out on beat, I take photos of things that make me sad, or situations I don't agree with, and I have to remind myself that the job of a photographer is to simply document without prejudice.